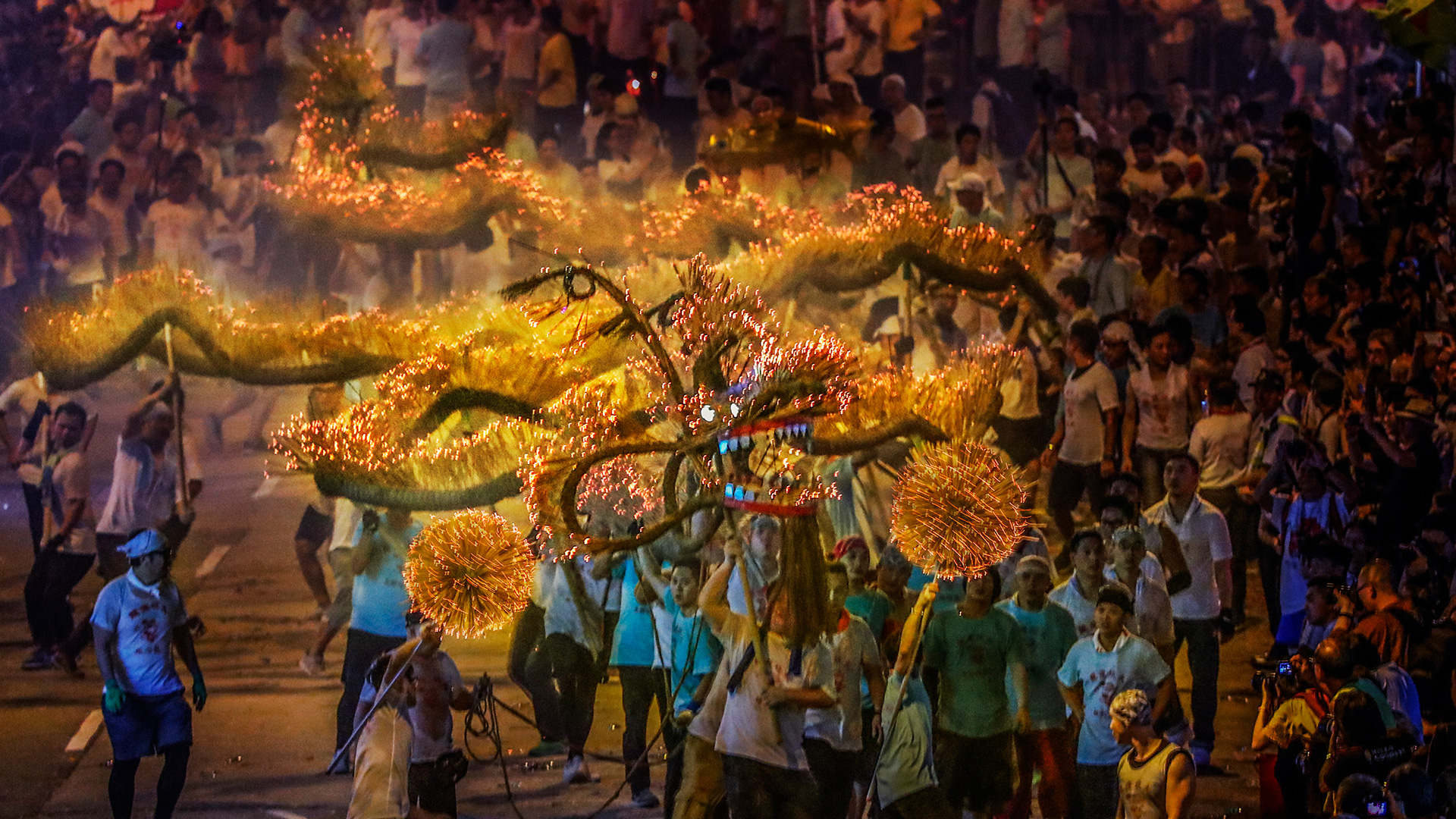 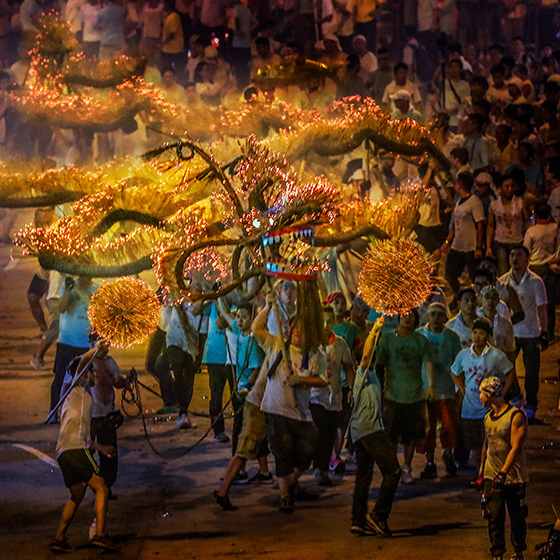 Tai Hang is still a village, even if it is being swallowed up by the high-rise city that surrounds it. Walk through its narrow grid of streets and you’ll find a few stone houses from the 19th century. Every Mid-Autumn, the streets fill up with smoke for the fire dragon dance, a 138-year-old village tradition rooted in Tai Hang’s past as a fishing and farming community. At the heart of it all is Chan Tak-fai, known to everyone as Fai Gor – Brother Fai.

You’ll find Chan Tak-fai at the heart of it all. Everyone knows him as Fai Gor – Brother Fai. Born in 1946, he has has spent his entire life in Tai Hang, and he is as close to a village chief as you can get. Fai Gor leads the Fire Dragon Dance each year and since 2011, the tradition has been on UNESCO’s National List of Intangible Cultural Heritage in need of safeguarding.

Sitting inside the banquet hall of the Tai Hang Residents’ Welfare Association — the de facto village hall — Chan spreads a collection of old photos across a folding table. “I’m a Hakka person and this was a Hakka village,” he says. Settled in the 19th century, Tai Hang formed a tight cluster of stone houses along the southern shore of Causeway Bay. Families raised pigs for food and earned money by washing the clothes of city dwellers or by quarrying for granite in the nearby hills. The village had a glassblowing workshop and a Hakka-style confectionery. “There was a cattle depot at Wun Sha Street – we would milk the cows and bring it to the shops to sell,” recalls Fai Gor. 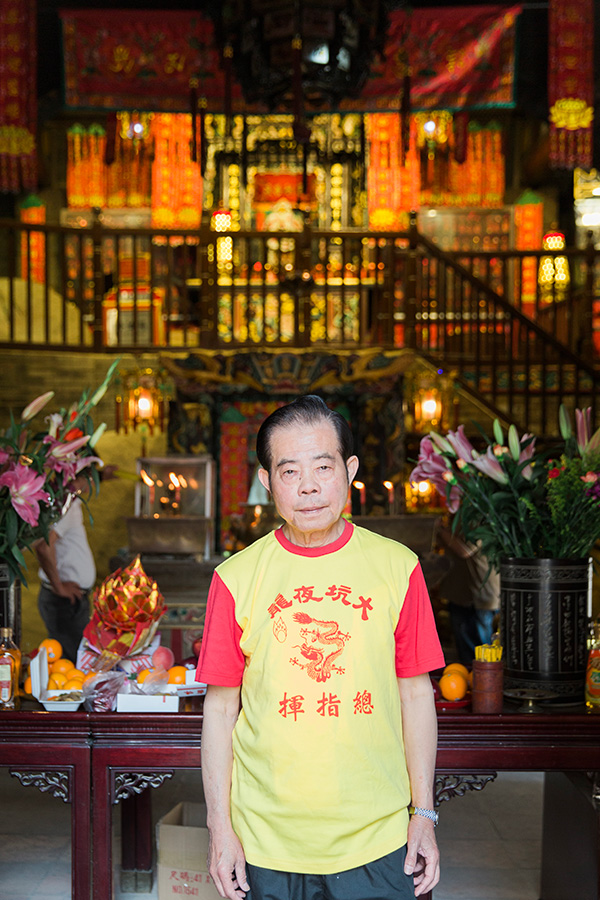 “I’m a Hakka person and this was a Hakka village.”
“There was a cattle depot at the end of Wun Sha Street – we would milk the cows and bring it to the shops to sell.” 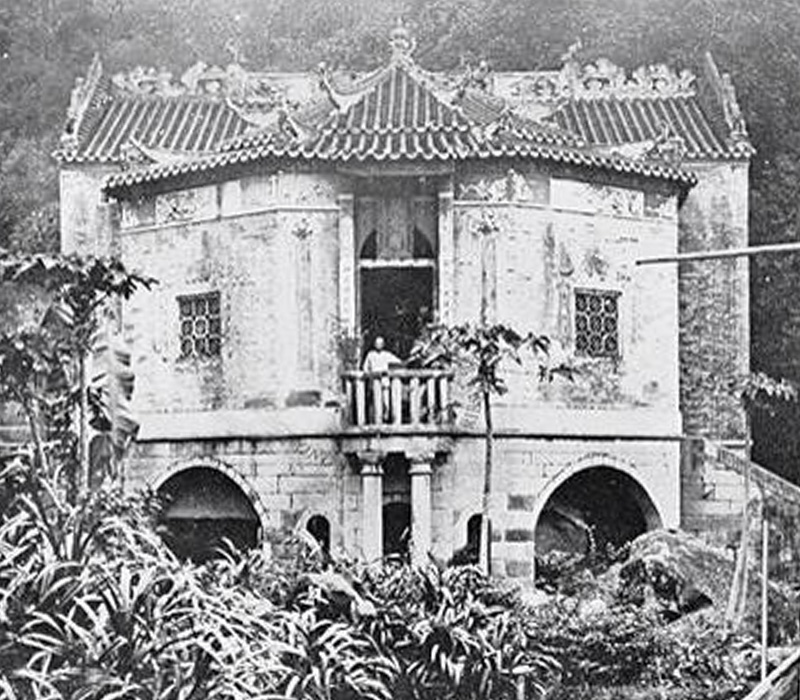 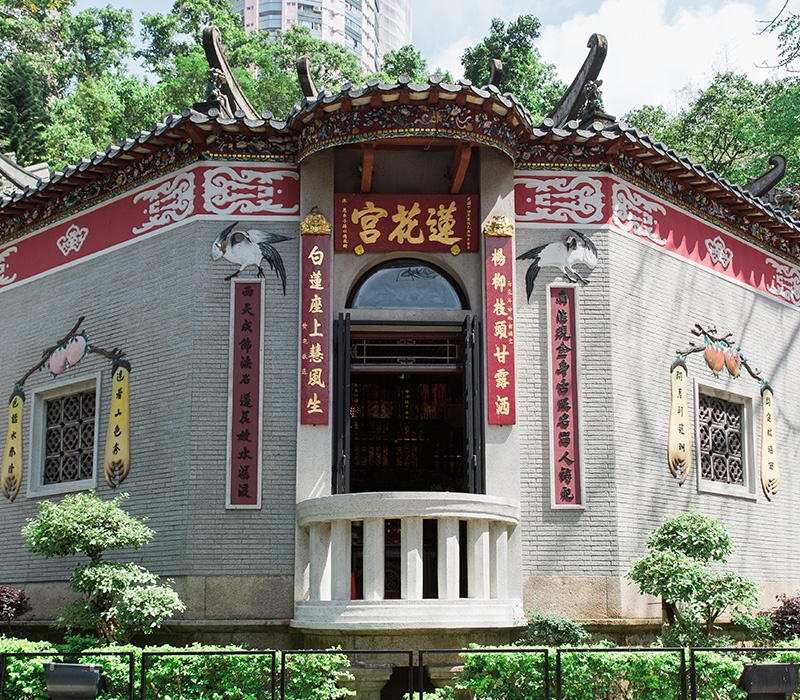 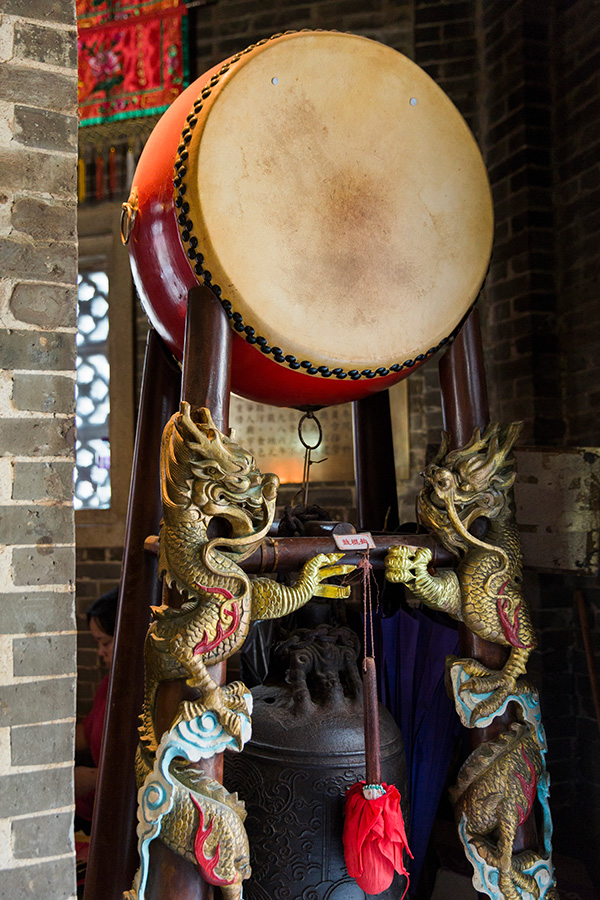 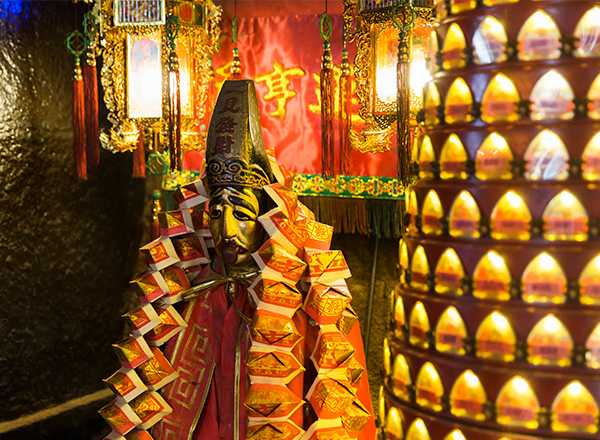 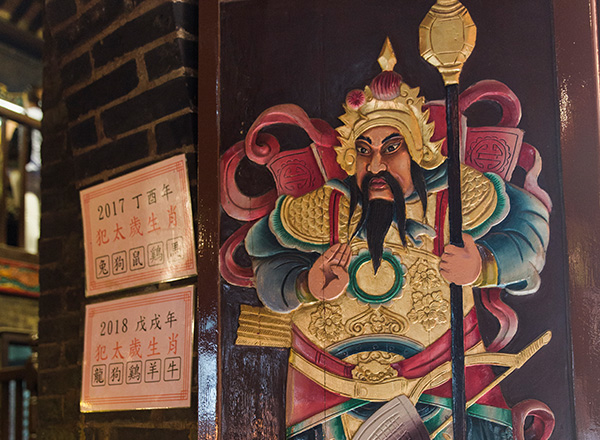 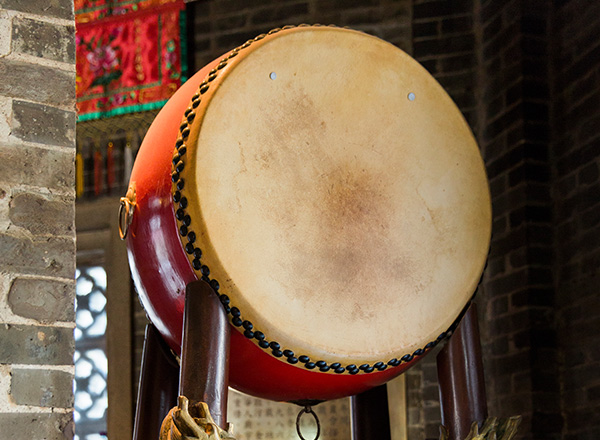 “If you’re a Tai Hang villager, you’re participating in the dance.
People used to throw firecrackers from the second floor of their houses.”

Most villagers lived in simple 300-square-foot stone huts with a tiled roof and a cockloft. “Know how many people lived in each house? More than 20!” exclaims Fai Gor. “There was no bathroom, no running water.” In the early 1960s, small-time property developers began buying two or three village houses at a time and knocking them down to built six-storey tenements. “They’d offer the previous owner the top floor flat and the rooftop,” he says. The village remained intact.

Even as the neighbourhood’s built environment transformed, some things never changed – especially the fire dragon dance. Fai Gor began taking part when he was six years old. He started out by carrying lotus flower lanterns, lighting the way for the dragon. “If you’re a Tai Hang villager, you’re participating in the dance,” he says. “People used to throw firecrackers from the second floor of their houses.” When he was 14 years old, he graduated to carrying the dragon itself.

Fai Gor was following in the footsteps of his father and grandfather before him. The tradition of the fire dragon dance started in 1880 after a typhoon devastated the area and a giant python attacked the livestock, followed by a plague that killed many. The villagers made a dragon out of straw, studded it with incense and danced for three nights to appease the gods and ward off further destruction. 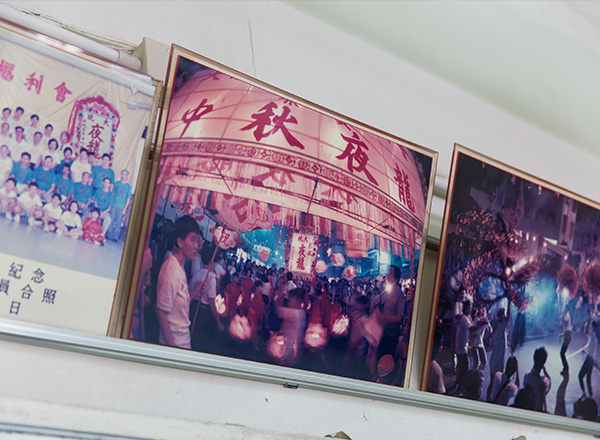 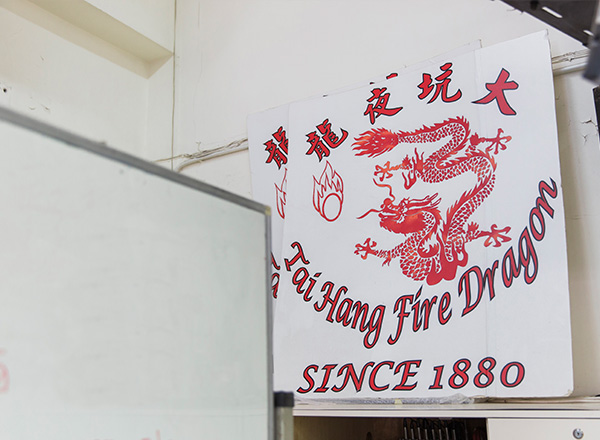 The dance began at an auspicious place: the Lin Fa Temple, where the goddess Kwun Yam is said to have appeared sometime in the 19th century. That led villagers to begin worshipping at the rock, and in 1863, the Lin Fa Temple was built on top of it, a distinctively hexagonal structure that overlooked the nearby village. Eventually, images of dragons were painted on the temple wall, in recognition of the annual dance. By the time Fai Gor was born, the barren hillside behind the temple had been colonised by refugees from mainland China, and it eventually became known as Horse Mountain, a shantytown notorious for gambling and prostitution. “The police only went there to collect bribes,” he says.

That changed when the government cleared the shantytown in the 1970s, moving everyone into public housing estates. The fire dragon dance had begun to change, too. By then, Fai Gor had been promoted to dance leader, and he began to shake up some of the old traditions. Historically, the dance had always started with Hakka-language ceremony at the Lin Fa Temple. Only village men were invited, but Fai Gor realised that if the tradition were to survive, it would have to become more inclusive. For the first time, he allowed women to join the ceremony, and its rites were translated into Cantonese for the benefit of the younger generation, who didn’t know how to speak Hakka.

Other rules have been relaxed, too. In the past, only native villagers could perform in the dance, but it is now open to anyone who lives in Tai Hang. “Even if you’re a newcomer, everyone in Tai Hang is welcome to participate,” says Fai Gor. The dance used to be funded entirely by donations from Tai Hang residents, but it now survives thanks to a grant from the Jockey Club. Tai Hang has gentrified quickly in recent years and many of its newer residents don’t feel much of a connection to the neighbourhood’s history.

But there are still villagers like Fai Gor who keep the thread intact. Asked whether the rest of his family takes part in the dance, he laughs. “That’s my daughter right there,” he says, pointing at a black-and-white photo of a young girl kneeling on the street, surrounded by incense smoke. “My two daughters, brother, sister, nieces, nephews – they all take part. There’s still lots of us left.”