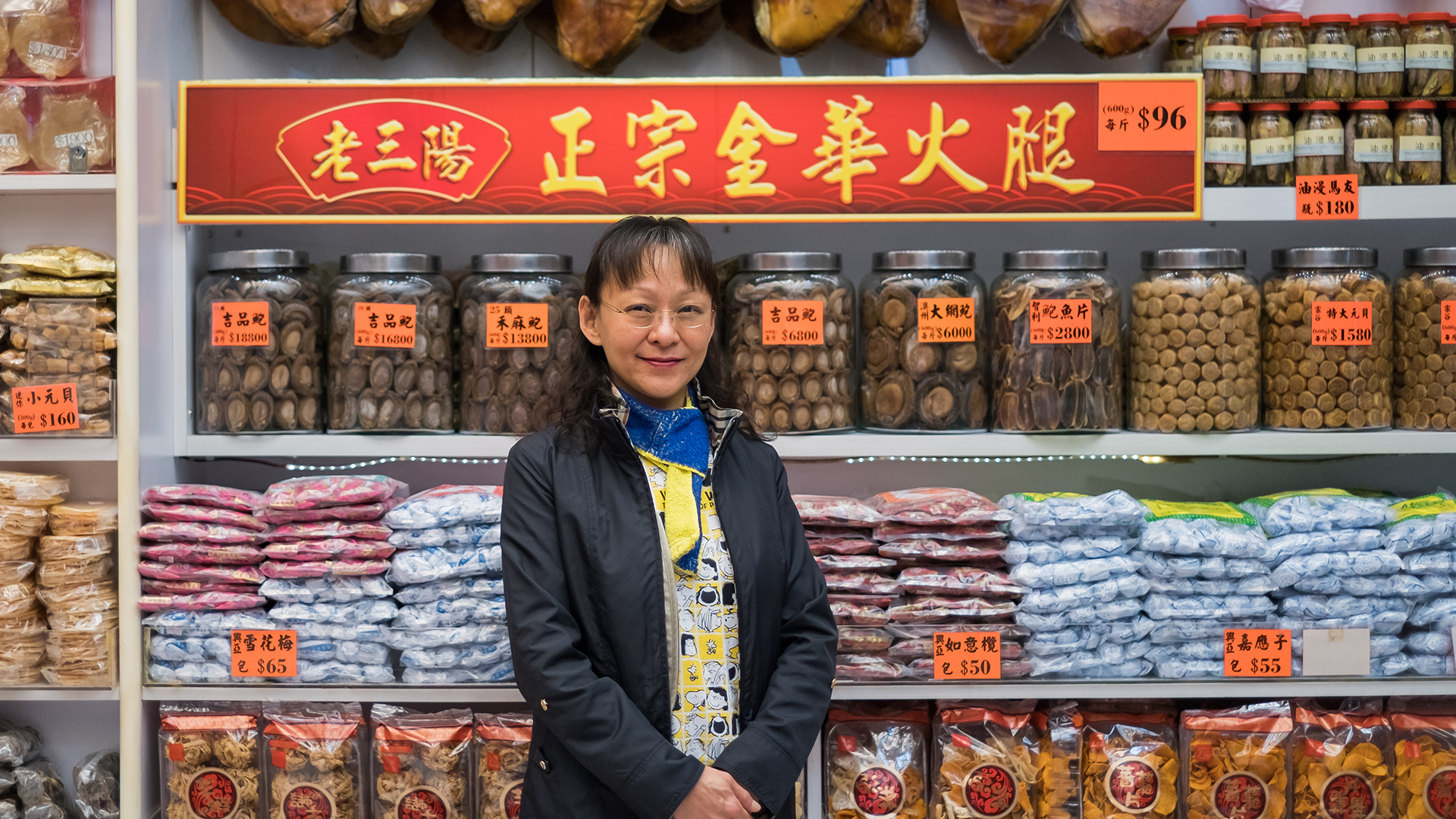 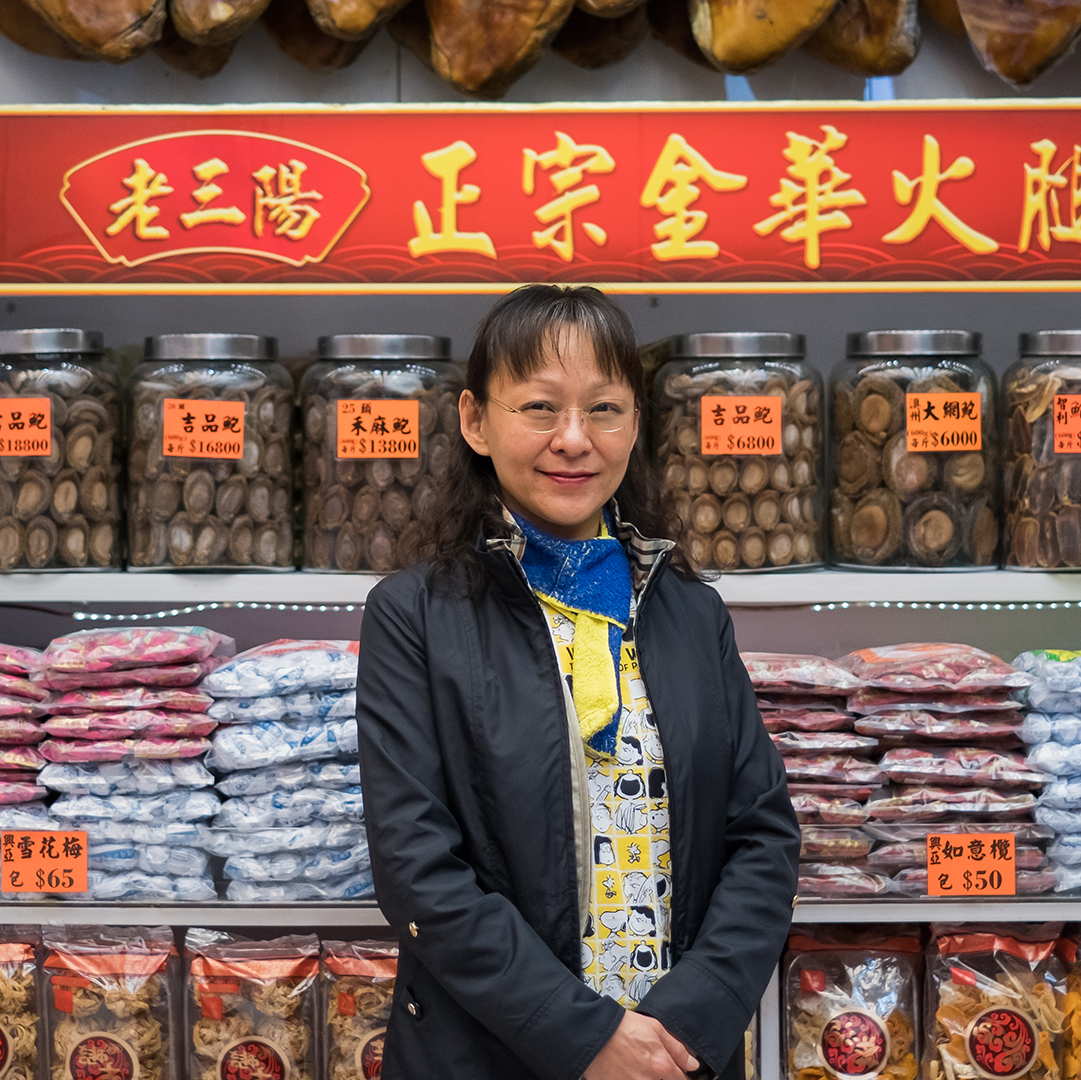 It’s difficult to imagine Causeway Bay as anything but a bustling metropolis, but Sandy Ki has witnessed the neighbourhood evolve into the burgeoning business and shopping hub it is today. “I remember when Times Square was just a tram stop, and the pedestrian area was lined with fruit stalls,” she says. “I witnessed them build the MTR, Times Square, Sogo and so on.”

As the owner of Old San Yang, she is surprised by how the family business has survived despite all the changes. Its trove of Shanghainese produce ranging from hairy crabs from Jiangsu, Jinhua ham, various condiments and pickles, to dried seafood and glutinous rice dumplings, is considered an institution to many.

“I expected a traditional store like ours to die out,” Sandy admits. But Old San Yang stands strong after over forty years of operation, with throngs of customers heading to the store to stock up on specialties, especially during Chinese New Year and Dragon Boat Festival. “During Chinese New Year, I think about the dishes my grandmother used to make. I didn’t enjoy the food when I was young, but now that I’m older I miss eating those dishes all the time.”

Her customers too, are looking to recreate traditional dishes they ate in their childhood and head to Old San Yang’s current location on Lee Gardens area’s Pak Sha Road for ingredients. “Their mothers used to cook these dishes for them, and they don’t know how to, so I’m more than happy to pass on my recipes,” she says.

Sandy’s father is the founder of Old San Yang and helmed the original four-storey store on 163 Queen’s Road Central, across from Central Market. As a young girl, she used to take the ferry to visit her father at work. The building was eventually torn down by the government in order to widen the streets. 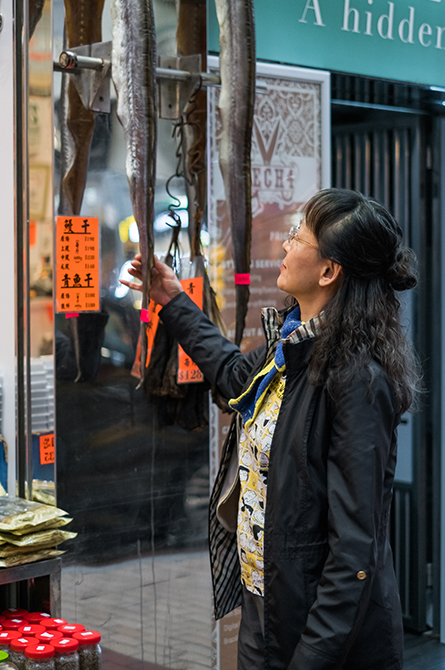 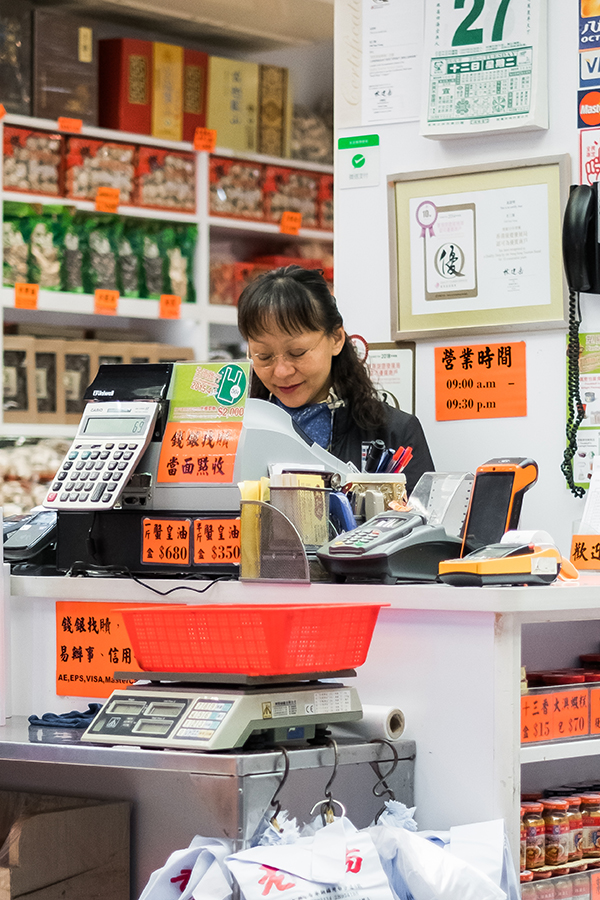 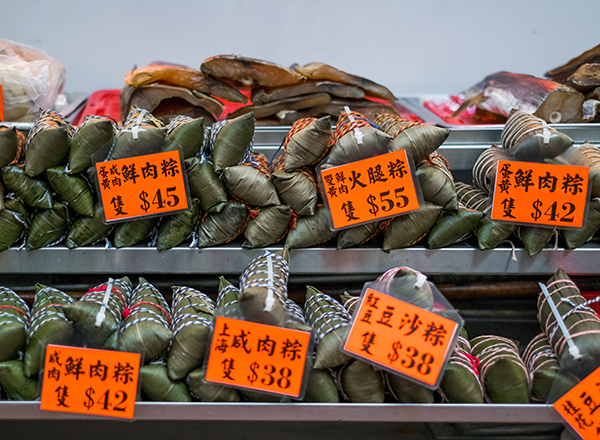 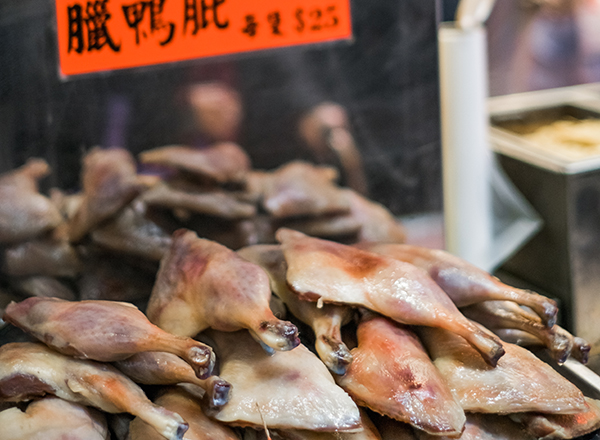 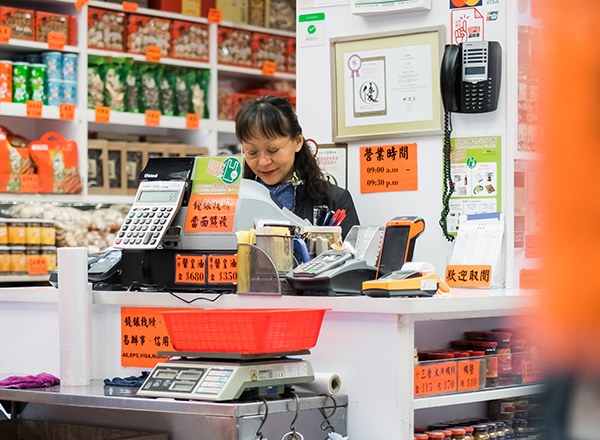 “I remember when Times Square was just a tram stop, and the pedestrian area was lined with fruit stalls. I witnessed them build the MTR, Times Square, Sogo and so on.” 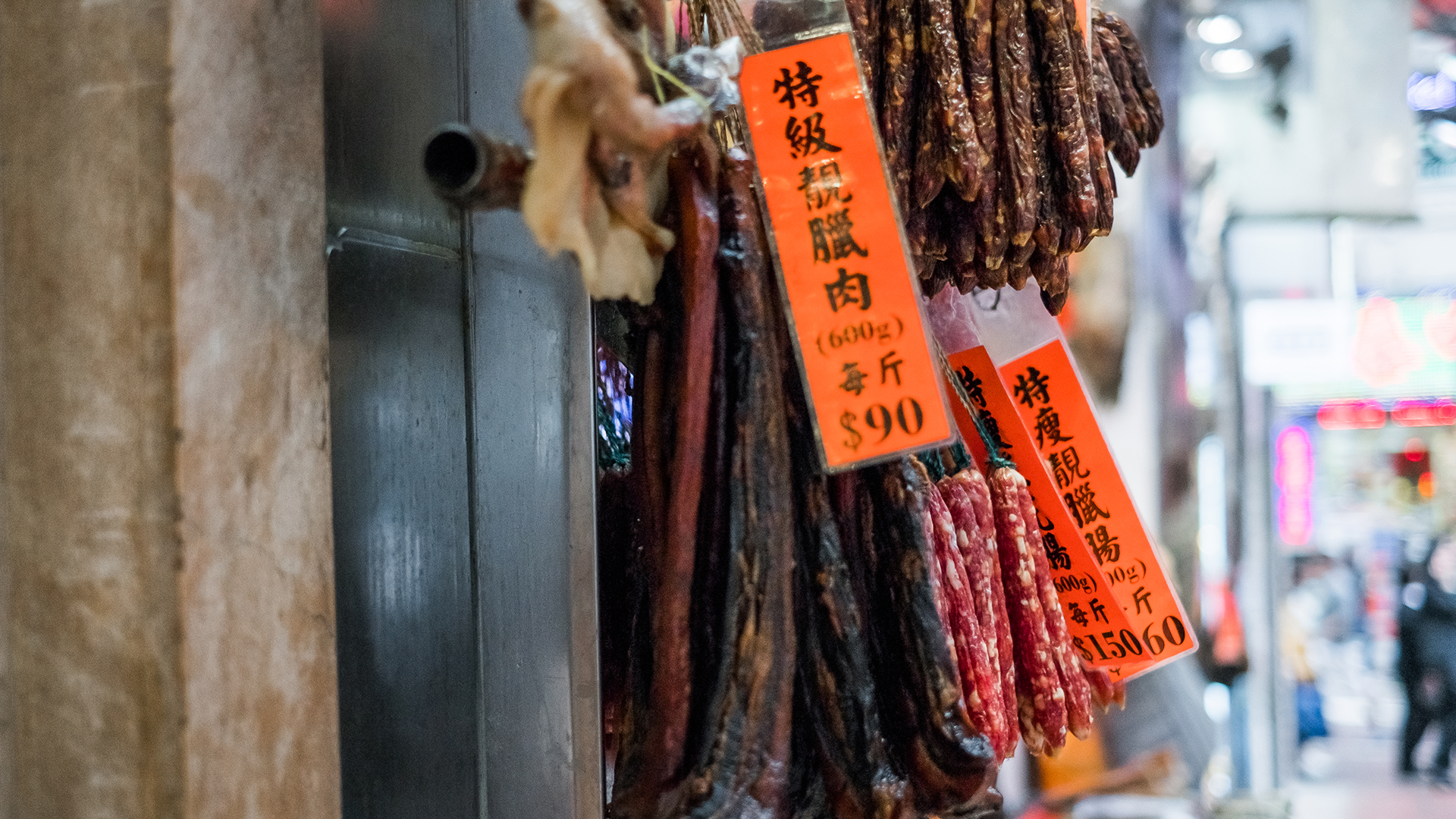 “With only HK$1 in his pocket, he took a three-day trip via Guangzhou and Shenzhen to end up in Hong Kong, so he could earn a living, no matter what.”

At the age of 17, Sandy opted to take over her father’s store instead of continuing her studies. “Not many people inherit a business in the second generation of the family, so it was tough for me at first.” Even at a young age, she was determined to expand the business and eventually developed a plan to expand from retail to wholesale.

Her business savvy could well be a family trait. Sandy’s father grew up in Hong Kong, getting  a taste for the business spending time at her grandfather’s four-storey sauce store in Sai Wan. “When my father was a child, he used to run up to First and Second Street during the war to look out over the Japanese battleships at sea. If there were nine of them, it meant they were going to start firing.”

Her father returned to his hometown in Zhejiang Province, Shaoxing to seek refuge from the war. “After the war, he saw someone on a boat, dressed in a long coat and a pointy hat as if they were in a movie,” she says. The contrast of this man and his reality of seldom affording food and eating tree roots was enough for him to decide to return to Hong Kong. “With only HK$1 in his pocket, he took a three-day trip via Guangzhou and Shenzhen to end up in Hong Kong, so he could earn a living, no matter what.” 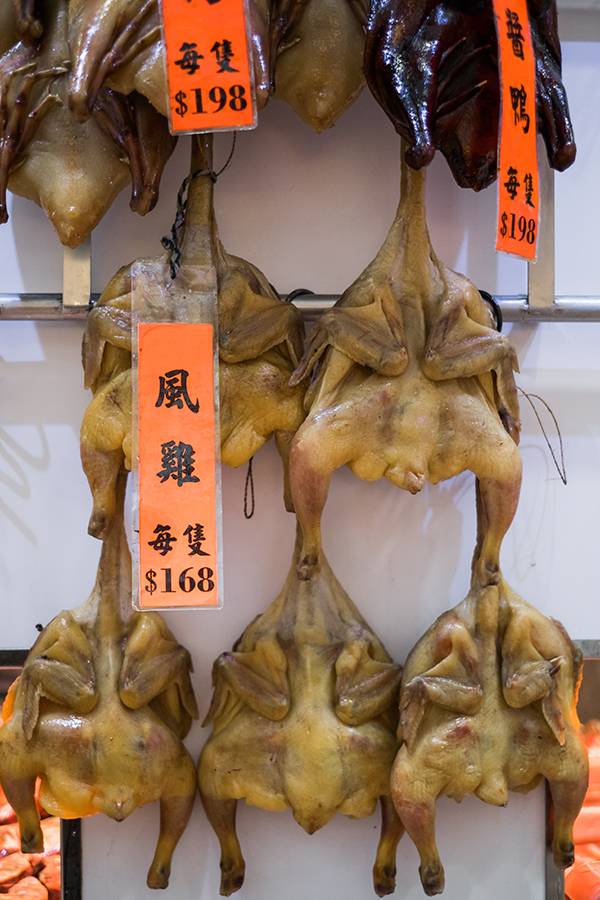 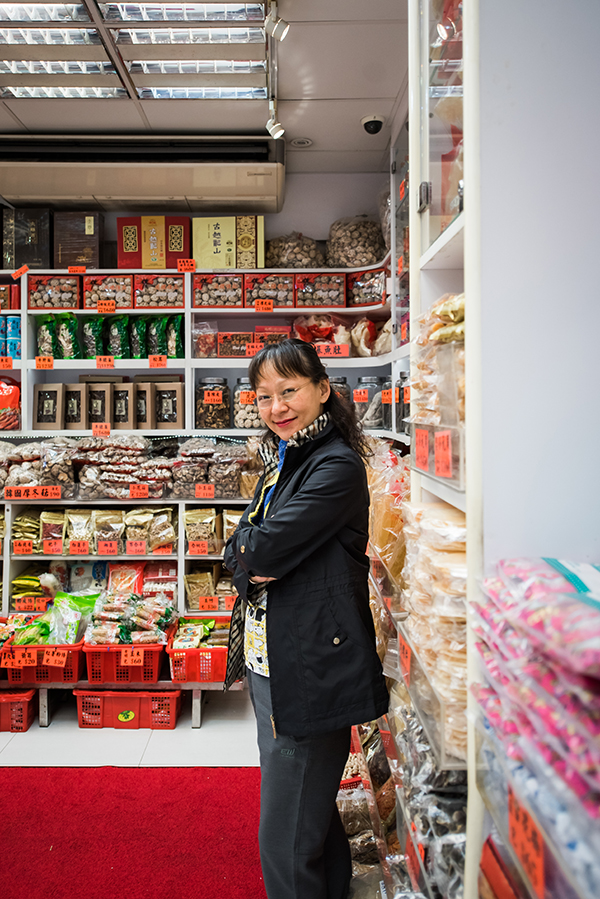 They moved from Central and set up shop on Kai Chiu Road before moving to 27 Lee Garden Road, sandwiched between Lung Wah Restaurant, Dai Kwong Ming Pharmacy, and Wah Lung Barbecue, with Kat Hing Cha Chaan Teng above them. Kat Hing has now closed, but was once a popular breakfast haunt for Sandy, who used to eat cheung fun with her colleagues in the mornings. Sandy has borne witness to many changes, including a deterioration of traditional goods being handmade in Hong Kong. “When I was younger, there were Hong Kong chefs that made green bean cake, rice cakes and candy, but no one makes them anymore so these things are all imported from Shanghai.

Old San Yang’s claim to fame was its Jiangsu hairy crabs. “People would only eat hairy crabs at Shanghainese restaurants before; I was the one who introduced hairy crabs to Guangdong restaurants.” The idea struck on a busy night around Lee Theatre when she was waiting for the midnight rush of people leaving popular clubs in the area to buy hairy crabs to eat at home. “Back then, people would bring their girls out for midnight snacks and spend thousands on food. I bought a BMX bike so I could deliver the crabs to the night clubs or places where people went for midnight snacks in Wan Chai.”

The delivery service was eventually extended to restaurants. “I went to Tai Woo Restaurant and begged them to put up posters advertising hairy crabs, and in exchange I would teach their chefs how to cook the crabs, since Guangdong chefs didn’t know how to at the time.” Each crab would sell for HK$800-1,000 per piece and eventually their delivery orders grew exponentially. “I would make a delivery and before I got back to the store, there would be another one!”

Before she turned 18, Sandy developed Old San Yang’s delivery and wholesale business. “The business was doing well, but the volume for wholesale is bigger. I didn’t need to wait for clients to come to the store this way.” They began to ship internationally, beginning with Singapore, only a few years later. “I had no idea how to do international delivery, so I walked into Cathay Pacific Cargo and got to know the employees who taught me what to do.”

Sandy soon traded her bike for a delivery van, passing her driving test right before she turned 19. She no longer has to drive around doing deliveries but Old San Yang continues to supply a plethora of Shanghainese stores and restaurants on Hong Kong Island and in Kowloon. With such a storied past in Causeway Bay, Sandy has no plans to moving to a new space.

“My roots are in this neighbourhood,” she says. “I have customers who have come here for three generations.” Sandy’s grit and determination may well be the reason that there’ll be four generations of Old San Yang customers.